Rohingya Crisis: The Strength of a Father

“When the soldiers came, they started shooting through our village and killed 13 people,” tells Mohammed, a Rohingya father of 10.

Mohammed and I are almost the same age. We are both fathers who dearly love our children. Yet, our lives are worlds apart. I have never experienced being the target of ethnic violence and although we would both go to extreme lengths to protect our families, I have never had to.

Last year I visited Kutupalong, the refugee camp in Bangladesh where Mohammed sought refuge, because I wanted to see Medair’s work in action and meet the Rohingya community. Mohammed, on the contrary, came to Kutupalong because it was a matter of a life-or-death. He was forced to flee with his wife Rukhia and their 10 children, ranging from 1 to 18 years old, in order to find safety when soldiers attacked his village.

A life or death decision

In August 2017, when he witnessed mass atrocities being committed against the Rohingya minority, Mohammed didn’t hesitate for a second. He grabbed his children and set off on a harrowing journey to Bangladesh, fleeing the escalating violence in Rakhine State, Myanmar, and leaving all his possessions behind. “At the time, I was numb. Darkness overtook me. I was living but I don’t know how. I had seen so many dead bodies and burning homes. It was very painful for me to leave home, not having a destination,” says Mohammed, his friendly face creased with concern.

It took four exhausting days before Mohammed and his family reached the unknown land of Bangladesh. Holding his youngest son Mohammed, named after his father, close to his chest, he recalls: “The path was very difficult to walk, very hilly.  Finding shelter for my children was difficult and they struggled to sleep. I worried about how I would provide food for my family and would go out at night in search for food. I felt helpless.”

Safe, but not at home

Now living in a crowded refugee camp in Bangladesh, alongside over 600,000 Rohingya refugees in an area of just 13 square kilometres, life has brought new challenges. Mohammed is grateful for the safety that the camp provides but is a far cry from the village he left behind. “I had a nice house in Rakhine,  with furniture, surrounded by trees and land,” says Mohammed. He continues: “I don’t have a job and it is crowded here. There is noise everywhere.” 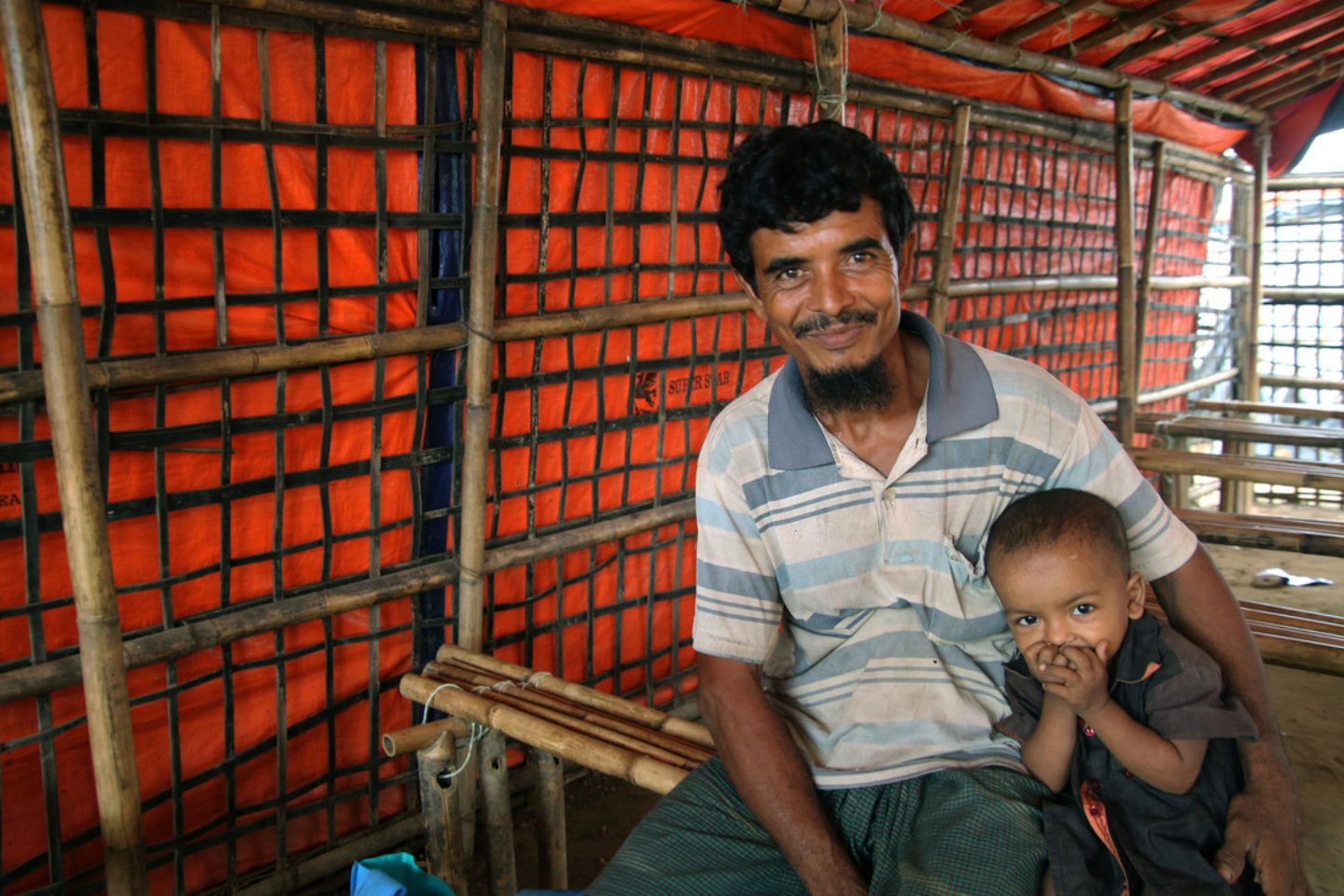 Mohammed’s greatest dream is to be officially recognized as a Rohingya and as a citizenship of a country. This is something I have never had to consider in my own life . “If  only we could get recognition as Rohingya, we would go back. We want to be part of our country and benefit from human rights and freedom. But it will require more time. I’m unhappy. I’m very unhappy about this situation,” says Mohammed, surrounded by six of his children, who are listening attentively to their father.

I’m grateful for the small difference that we can make in Mohammed ‘s life. He says: “I receive food from Medair. I provide this food to my children and they are happy. If they are happy, I’m happy as well.” People like Mohammed are the reason I work for Medair.

Mohammed’s love for his family is inspiring. Being a father myself, I’m probably even more touched by it. Knowing that Medair can walk alongside people like Mohammed as he takes care of his family compels me to continue doing what I do. Medair’s mandate is to bring hope and life-saving relief.  Together with my colleagues, I want people like Mohammed to know that they are not forgotten and help him to have hope for the future.

As displaced people move to new communities or new countries, their presence impacts the existing population, many of whom already struggle to survive with limited resources. As tensions rise, coping with refugee migration has become a burning political issue around the globe.

With no end in sight, it’s no exaggeration to say we are living in an age of displacement, and the way we respond to it will help define this generation. Help Medair provide a response by making a donation today to our Refugee Fund.