“They came suddenly, at night. It was a Friday.”

Rahim* always dreamt of becoming a doctor. As a child growing up in a small village in Rakhine State, in western Myanmar, he observed his uncle – a doctor – and decided he wanted to follow in his footsteps. “My parents were very supportive. They sent me to school, and always encouraged me to study. I really enjoyed school, especially biology.”

Having successfully completed his primary education, Rahim left his village and his family to pursue his studies some 20 miles away in a larger city. As a young 17-year-old Rohingya boy growing up in Myanmar, his life was not an easy one. In fact, it was extremely challenging. A predominantly Muslim minority, the Rohingya have been the target of relentless abuses, discrimination, and persecution for decades. Living a carefree life, believing anything is possible, was not an option for Rahim. In spite of this, he held on to his dream. 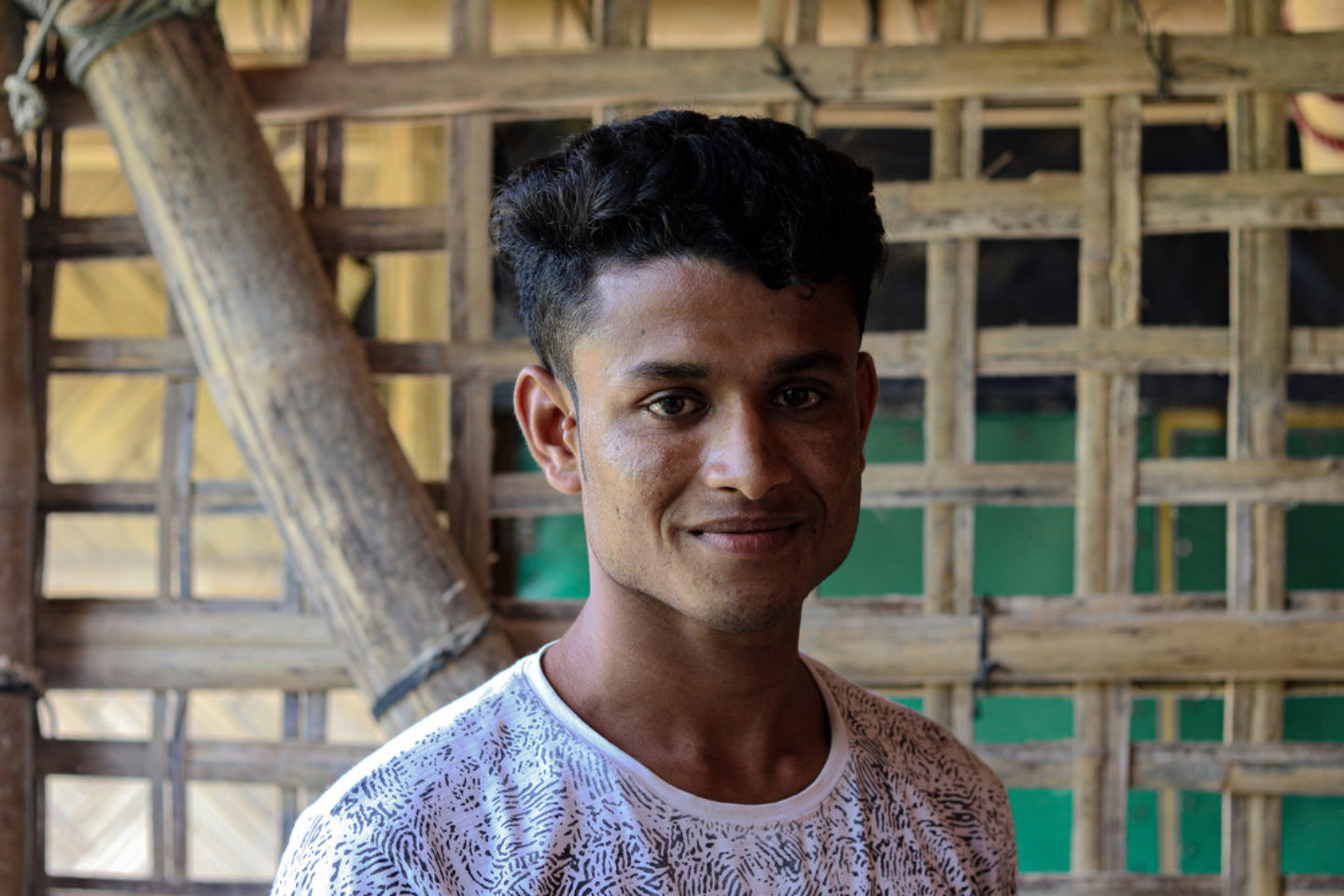 Until, one August night, he received a call. As he picked up, he immediately heard the panicked voice of his mother calling from their home village: “Soldiers are here, they burnt our house…they are burning everything! We have to flee immediately.”

From afar, Rahim tried as best he could to make sense of what was happening. Attacks on his people had happened before, many times in fact. But something about this felt different. Terrifyingly different. “They came suddenly, at night. It was a Friday. August 25, 2017. My parents told me people were being killed. My nephew had been shot as he tried to flee. The soldiers took him away. We later found out he had been killed. He was my age, 17.”

Rahim’s family was forced to flee, leaving all their possessions behind. Yet as hundreds of people began frantically making their way to the Bangladesh border, his parents were adamant: “They told me they refused to leave the country without me, that I had to join them, and we would cross the border together, as a family.”

As reports kept pouring in from attacks in his village and the surrounding areas, Rahim realised he now had a target on his back. “I knew that if I left to try to find my family, I would likely be killed. I urged my parents to go to Bangladesh, and reassured them that I would be safe where I was.”

For several days, his family hid in different villages hoping to buy enough time for him to join them. But it was clear the situation was not improving and that, by staying in Myanmar, the whole family was at risk. “I told them that I was well hidden, and that once the situation calmed down, I would join them.” Eventually, the family reluctantly agreed to head to the border. Rahim was relieved. Though he could no longer contact them, he knew his family was safe. 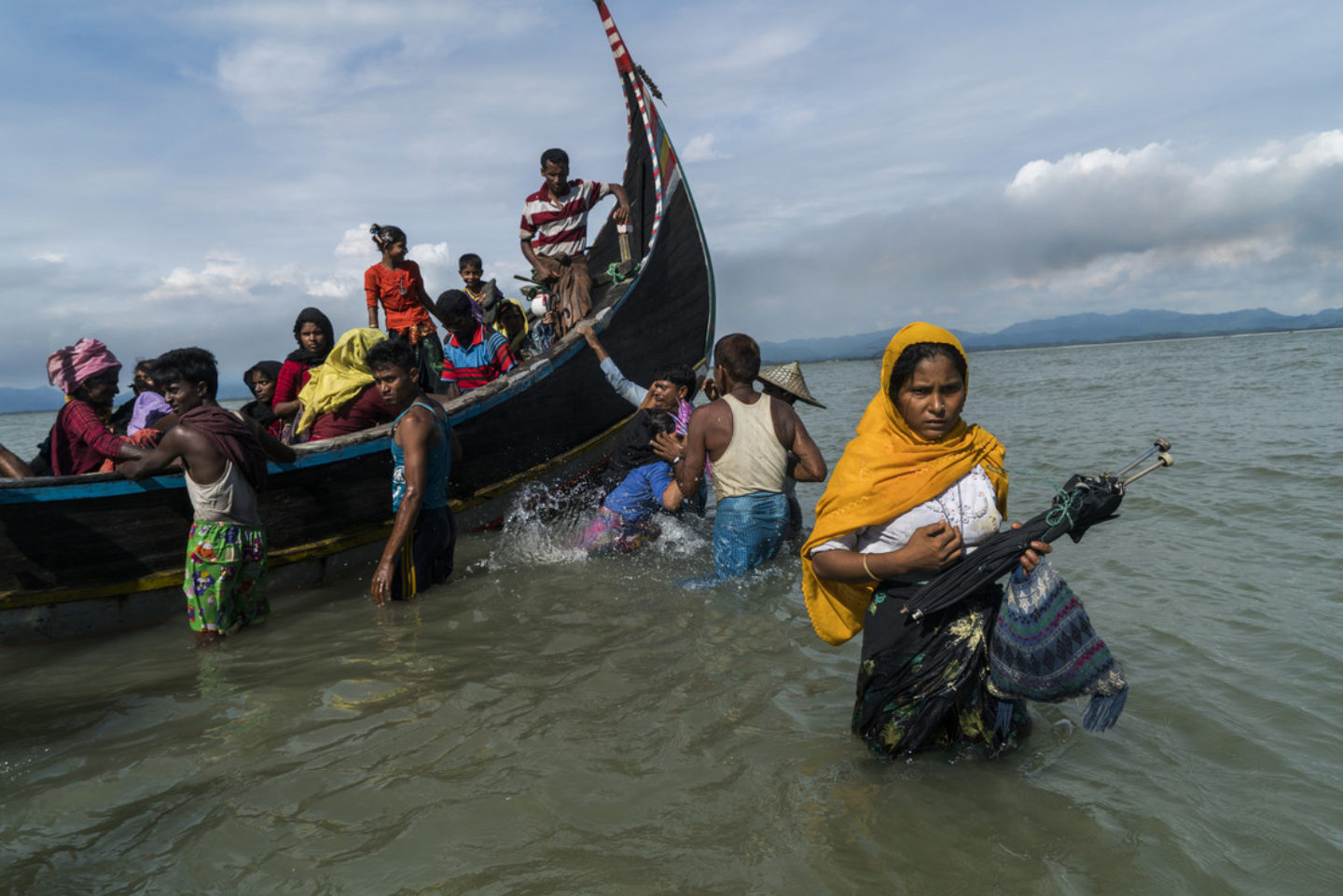 Rohingya refugees scramble off a boat arriving in Bangladesh from Myanmar as it lands on a beach in Dakhinpara, Bangladesh on Sept. 14h, 2017. © UNHCR/Adam Dean

For weeks, he hid in the home he shared with other students, trying to be as discreet as possible: “I couldn’t sleep at night. I was very scared.” As money and food started running out and with no respite in the attacks, Rahim’s situation was becoming increasingly precarious. He knew the clock was ticking. After three months, he decided it was time to leave.

Over the next four days, along with 11 other students, he walked and hid trying to make his way to the border. Just beyond the river, Rahim told himself, safety, freedom and – most importantly to him – his family awaited. A few more miles to walk, and the nightmare would be over. Yet he knew the journey he was attempting was a particularly perilous one, and soon his worst fears were realised.

“As we were crossing an open field, soldiers caught us. They stopped us, and asked us where we were going.” Rahim and his friends decided their best bet was to tell the truth. Since soldiers seemed so intent on chasing their community out of Myanmar, admitting they were heading to the border might convince them to let them go. But the soldiers had only one idea in mind: “Kill them all,” one of them ordered.

“I was sure it was the end. With my friends, we started reciting verses from the Quran because we knew we were about to die.” But before the order could be followed through, another army official – “someone with a higher rank” – arrived at the scene. He questioned Rahim and his friends and eventually, after 30 excruciating minutes, they were allowed to leave. Now with first-hand experience of the danger they were in, the students made their way to the border as fast as possible, and managed to enter Bangladesh.

As he did so, Rahim, the boy who dreamt of becoming a doctor, became someone he had never thought of and certainly never dreamt of being – a refugee.

For now though, Rahim was brimming with excitement at the prospect of reuniting with his family. After all the hardship he had endured, and months of living apart from them in a country that did not want him, he finally had reason to hope. Yet as he made his way through the makeshift camps, he quickly realised what an impossible task finding his family might be. Hundreds of thousands of people had fled Myanmar since that fateful Friday, settling in fields, hills, and forests. Everywhere he looked, as far as he could see were tents, shelters, and people. 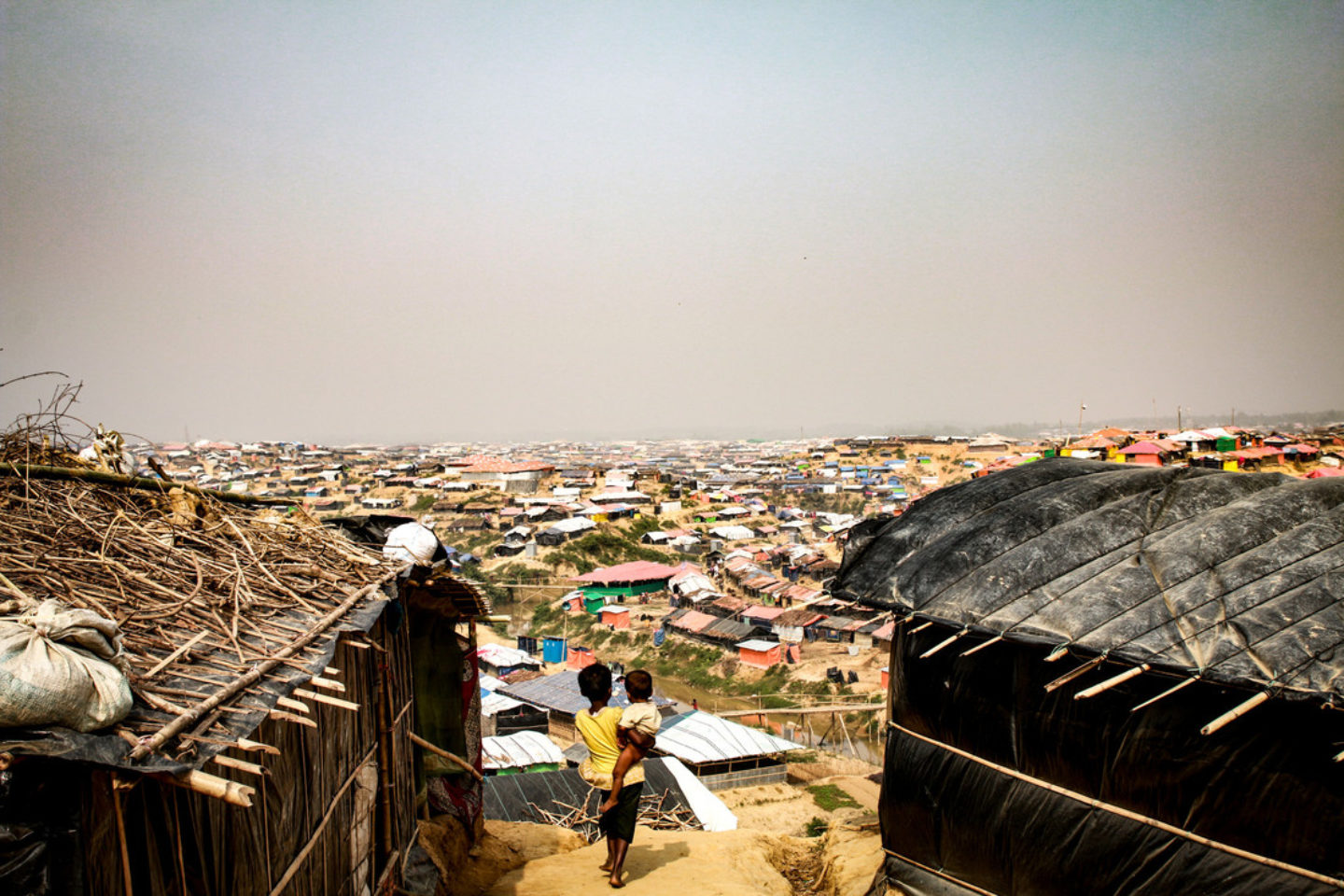 A view of Kutupalong Camp in November 2017, which has become the world’s largest refugee camp. © Medair

With no cell phone, no money, and just the clothes on his back, Rahim wondered if and how he would ever be reunited with his loved ones. “I started asking everyone I came across: ‘Have you seen my family?’. I gave them details, like the village we came from, to help narrow the search.” Alone in what was fast becoming the world’s largest refugee camp, Rahim did not give up and eventually after six days he managed to locate them. “I had not been able to talk to them for three months. They didn’t know I was coming to Bangladesh. I was so happy!”

Soon, however, the reality of living in a refugee camp started to sink in. This, Rahim feared, would be his new life. Would he ever become a doctor now? With each passing day, it became increasingly difficult to remain hopeful.

One afternoon, as he was heading to meet friends to play football, he noticed construction work near his shelter. Curious, he went over and asked someone what they were building. A nutrition clinic, he was told, would soon open to treat mothers and children in the part of the camp where he had settled with his family. “I knew our community had many malnourished children. I wanted to do something about it, so I asked them if I could help in the clinic, once it opened.” Rahim left them his contact details and was eventually recruited as a Nutrition Volunteer for an 18-month project. As weeks and months passed, Rahim grew increasingly confident and happy in his role. 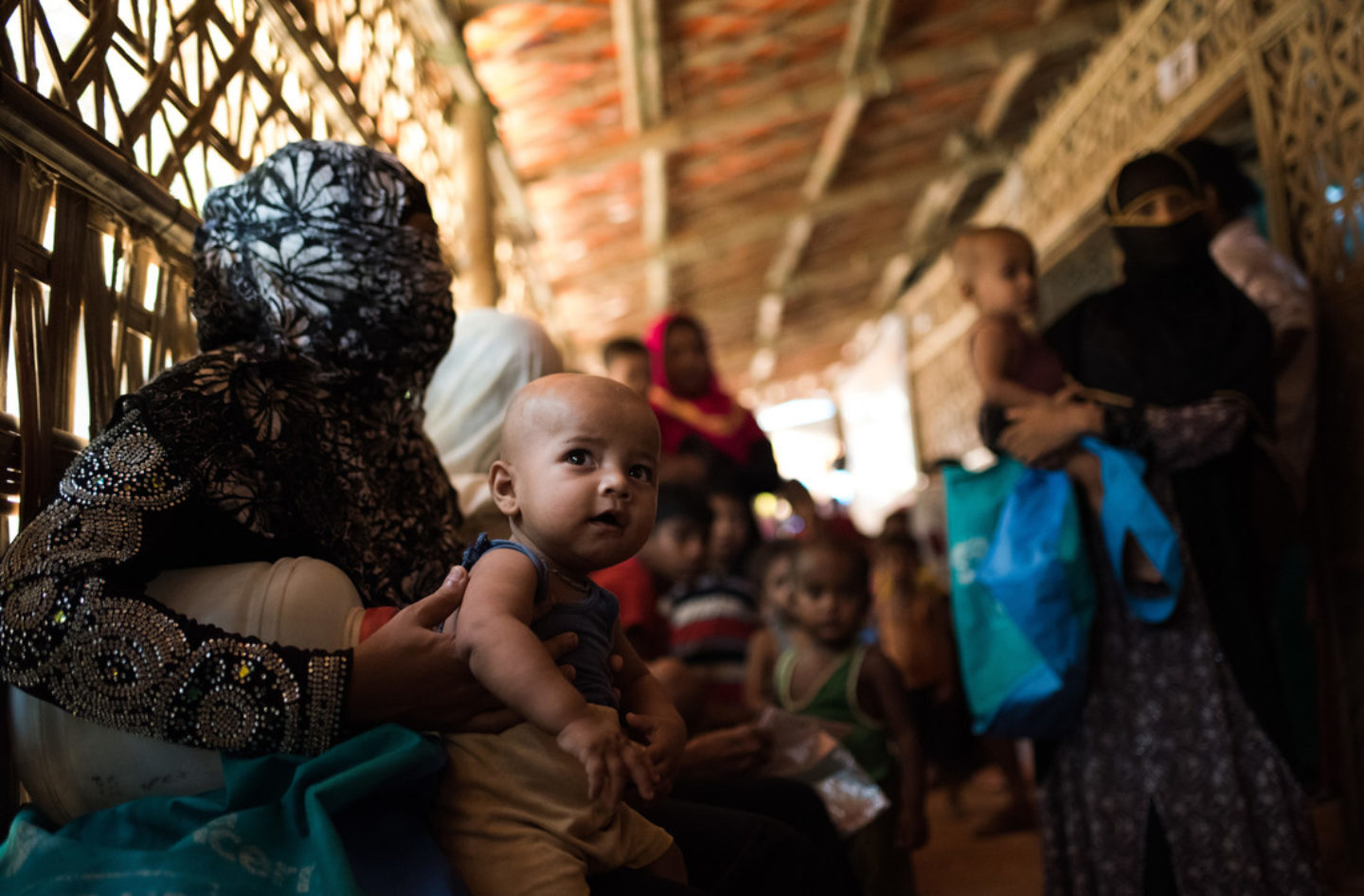 Mothers and children attend a consultation in a nutrition clinic in Kutupalong Refugee Camp. © Medair/Hailey Sadler

Within the clinic, Rahim also found a supportive community and a sense of purpose: “There are international people there, national staff and us, Rohingya. But we are all one team, and we are all trying together to make this community a better place.”

During the 18 months he spent volunteering at the clinic, Rahim was able to use his skills and develop new ones, which he hopes will be useful to fulfil his dream. With the project now drawing to an end, Rahim has made sure he has other opportunities to learn: “My friends and I asked someone in our camp to teach us English. Every day, we go to our tutor’s shelter. I can’t go to school but I can still study. When I’m at the clinic, I feel good. And when I study, I feel good. But the rest of the time, life is hard.”

Yet, throughout two years of hardship no 19-year-old should ever experience, Rahim’s dream and dedication to it have not wavered. He has had to find new ways to develop his skills while he waits for the day when he’ll be able to return to his country safely.

And though he believes that day is still far off, he presses on, quietly determined and hopeful that even in the midst of such challenging circumstances, his dream may yet still be within reach.

*Name has been changed for security purposes

Medair is an international humanitarian NGO that provides emergency relief and recovery services to families made vulnerable by natural disasters, conflicts, and other crises. Medair is currently active in 10 countries. In Bangladesh, Medair works in partnership with World Concern.

This content was produced with resources gathered by Medair field and Global Support Office staff. The views expressed herein are those solely of Medair and should not be taken, in any way, to reflect the official opinion of any other organisation.